Nick Knowles and Neil Oliver – Does History Repeat Itself? - CANCELLED

It is time to meet the common folk as Nick Knowles and Neil Oliver turn the spotlight on those who gave their all for the Britain, we know today. 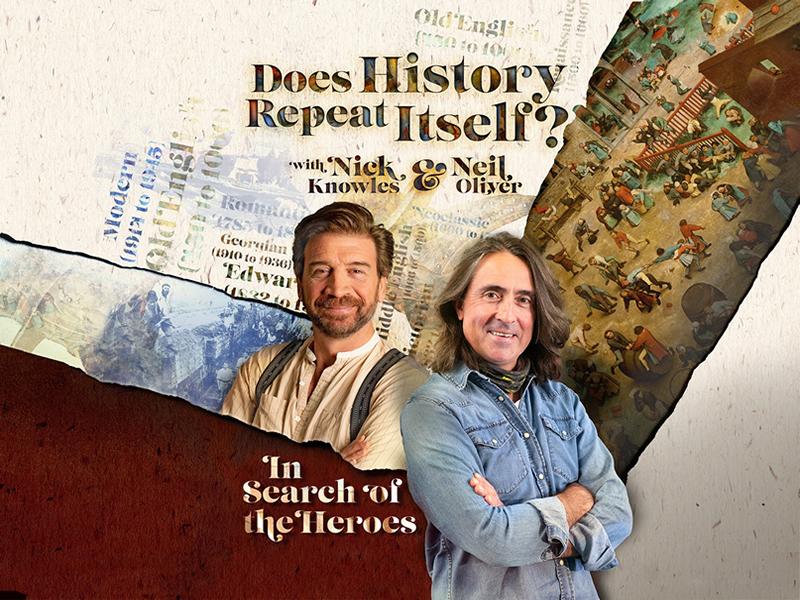 About Nick Knowles and Neil Oliver – Does History Repeat Itself? - CANCELLED

For the first time, two of the most recognisable faces of British broadcasting will try and answer one of the most emotive and topical questions of our time, ‘who are the British and how we got to where we are now’?

What has gone before, keeps happening again, and the real price is always paid, in blood, sweat and tears, by the same people. It is overlooked and forgotten souls, who have always done the heavy lifting and bear the burden of history.

This country was heaved into place by serfs and slaves, villeins and labourers. The ships that carried trade and transported the fighting men … the swords and longbows they wielded in battle … the ploughshares the farmers walked behind, the trees that were felled to build battleships and homes great and small … the stones shaped for cathedrals and the scaffolding that raised them up … every ounce of the coal that heated the furnaces … every ounce of metal mined from beneath our feet … all of it was the product of the effort and toil, the skill and endeavour of the common men and women of our past, bonded by common purpose.

This is a fanfare for the common man and woman – because the shoulders we stand upon today, are theirs. The nameless, unheralded, and un-mourned. Ignored until now.

It is time to meet the common folk as Nick and Neil turn the spotlight on those who gave their all for the Britain, we know today.

Grab the soup pot and get ready for Janey Godley, the “Queen of Scottish Comedy”, coming to The Albert Halls in October!
Read more

As one of Ireland’s biggest live music acts, Nathan Carter is becoming a household name. Catch him at The Albert Halls with support from excellent young vocalist, Claudia Buckley!
Read more

Join us at The Albert Halls Stirling on 30th October when we will be joined by comedian and climber Andy Kirkpatrick for his show 'Mind Your Head - Holidays from Hell'!
Read more

Join us at The Albert Halls Stirling on 10th December for an Abbatastic night out with all the hits you can sing along to!
Read more

Bag-rock legends Red Hot Chilli Pipers are heading out on their 20th Anniversary Tour which will stop off at The Albert Halls on 12th December!
Read more

Phil Cunningham brings his massively successful Christmas Songbook back to The Albert Halls on 15th December. What better way to get into the festive spirit!
Read more

Del Amitri have announced their first full UK headline tour since the summer of 2018 which includes a night at The Albert Halls Stirling on 16th December!
Read more

The Magic of The Beatles is one of the UK's leading Beatles tribute shows who play to ecstatic sell-out audiences all over the world, catch them at The Albert Halls on 5th February!
Read more

Elvis Tribute Act Johnny Lee Memphis is the official and current World Cup and European Elvis Tribute Champion and you can catch him at The Albert Halls on 26th February!
Read more

Join us at The Albert Halls for a Hayride of a Show in this tribute to Patsy Cline, Hank Williams and Jim Reeves!
Read more

Giovanni Pernice: This Is Me

Eddi Reader will be touring Scotland later this year as she celebrates her 40th year on stage, don't miss her perform at the Albert Halls, Stirling in April!
Read more

Stirling BGCP Comic Con returns to the The Albert Halls on Saturday 16th July 2022, bringing you all the best and current offerings from the geek world!
Read more

Ireland the Show will take you on a journey through the decades of a globally loved culture. If it’s all things Irish you like then this is the show for you!
Read more

This October take a History and Horror Tour round historic Bannockburn House to hear gory tales and ghastly stories from the past.
Read more

For our second session at Stirling Distillery on 15th October we welcome Brian Cattigan to entertain us with a fun evening of signing and dancing!!
Read more

The Orangery at Victoria Square has partnered with the Scottish Gantry to bring you a wine tasting and food pairing experience on 21st October.
Read more

Forth Environment Link is working to co-deliver My Bo'ness; a community climate action plan utilizing the 20-minute neighbourhood framework. Come along and share your ideas, enjoy pizza and a film!
Read more

Grab the soup pot and get ready for Janey Godley, the “Queen of Scottish Comedy”, coming to The Albert Halls in October!
Read more

Everyone's favourite children's theatre company, The McDougalls, return to the Tolbooth Stirling with a brand new live musical show for all the family!
Read more

As one of Ireland’s biggest live music acts, Nathan Carter is becoming a household name. Catch him at The Albert Halls with support from excellent young vocalist, Claudia Buckley!
Read more

Pecha Kucha Stirling, in collaboration with CodeBase Stirling, will finally return this October 27th for our first night since January 2020!
Read more

Join The Grail for this Virtual Halloween Tasting featuring 6 gins inspired by mythical creatures encompassing a range of tastes such as London Dry, Spiced and Liqueurs!
Read more