Six imaginative names have been shortlisted in the bid to come up with a title for Stirling’s popular Land Train. 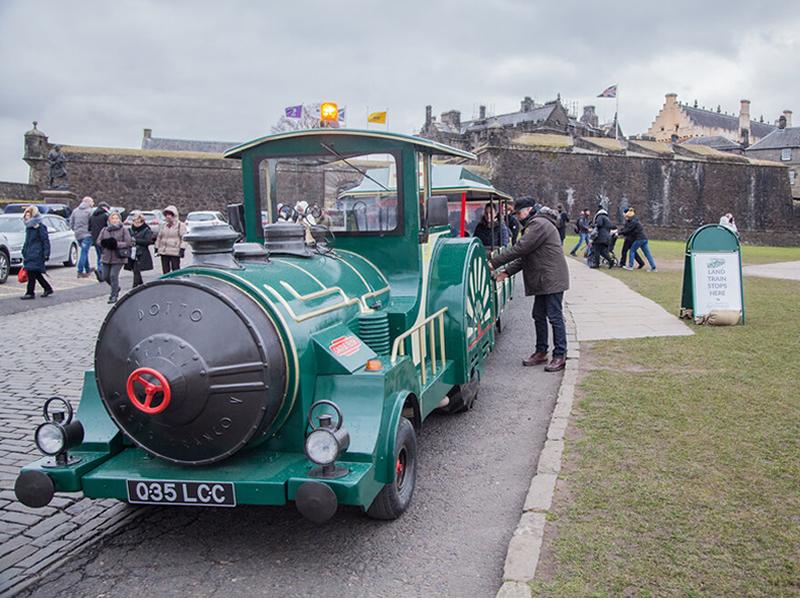 Six imaginative names have been shortlisted in the bid to come up with a title for Stirling’s popular Land Train.

There were more than 100 entries for the Name the Land Train competition which have been whittled down to a shortlist for a final public vote.

The names to choose from are: The Wallace Wanderer, Mary Train of Scots, Robbie ColTrain, Choo Choo McGoo, Liam the Land Train and The Forth Flyer.

The team at Go Forth Stirling BID, which runs the attraction, want the public to pick their favourite and vote via the following link - www.surveymonkey.co.uk/r/LTvote_R

There were 121 entries for the children’s competition to find a name which brings the Land Train to life and reflects its connection to Stirling.

They were considered by Go Forth staff, including Project Manager Mags Fenner and Land Train driver Craig O’Brien, and the shortlist of six drawn up.

Ms Fenner said: “We were delighted by the number of entries we had to the competition and the wide range of names youngsters came up with.

“It was hard to narrow it down to six, but we feel these final names represented the different types of entries we had well and any one of them would be amazing for the Land Train’s new name.

“I hope lots of people will have fun voting for the final name and look forward to discovering what name everyone thinks best suits our Land Train.”

The shortlist of proposed names is available online for voting and anyone can take part in the final ballot.

The vote runs until Friday February 21 and the winning name will be announced by the end of the month.

A main prize is on offer for the child whose name is chosen including the chance to attend the Land Train Relaunch and Naming Ceremony and a family fun day out in Stirling.

Meanwhile, further competition prizes include certificates and a family trip on the Land Train for all six youngsters whose names made the final shortlist.

The Land Train will be relaunched with its new name, which will remain in place until at least the end of the summer, at a ceremony to be held during the Easter holidays.

Part of the five-year Go Forth Stirling Business Plan, the Land Train was introduced during Easter 2018 with the aim of operating through the main tourism months and providing a key link between traders and Stirling Castle.

Initially, it ran through the city centre up to the Castle before a new and extended route was launched in summer 2019 taking in the Forthside area and covering more of the city and its attractions.

Passengers can join the Land Train at Forthside Car Park, near the Vue Cinema, or get on board at various stops along the route.

The train travels along Forthside Way towards the city centre with stops at Barnton Street, King Street, St John Street (set down only), the Castle Esplanade, Broad Street and Station Road before heading back to Forthside.

A dedicated Facebook page has been set up for the attraction with information about running times and more.

A Drive In Christmas Panto is coming to Glasgow and Edinburgh this winter!

Just when you thought your Christmas show had been cancelled, Horrible Histories comes to the rescue with their own unique take on the festive season!

Welcome to the House of Fun

Bannockburn House Trust is set to host a series of virtual events this month, starting with Doors Open Day this weekend (19-20 September).

Beat the Street Forth and Clyde sets off on the right foot!

The Beat the Street Forth and Clyde physical activity game is off to a great start this week with 1,062 players signed up and a total of 1,600 miles travelled!

Forth Valley Food Festival will return this October with a series of virtual and socially distanced events showcasing local food and drink producers, growers, brewers and eateries.

Dates announced for GlasGLOW, returning to light up the city this October!

itison have announced that GlasGLOW will return to Glasgow's Botanic Gardens from the 29th October to the 8th November with early bird tickets on sale on the 16th September!

Food Safety Awareness is one of the new topics added to Go Forth Stirling’s free online training programme this month.

Stirling’s business community is set to welcome new students as they arrive at the University of Stirling this weekend.

The Dog Ate My Homework

The Dog Ate My Homework, CBBC's BAFTA nominated comedy panel show, is back for a eighth series and they need you!

SBH Scotland are on the hunt for skydive heroes

Come fly with us in 2021! Join Team SBH Scotland for an exhilarating Charity Skydive at Errol Airfield, Perthshire.

Kids in Museums and Walkers Books announce an exciting half term activity for families!

Kids in Museums are delighted to announce that they are once again partnering with Walker Books on an exciting half term activity for families: Where's Wally? Spooky Museum Search!

The SAY Award Live at the Longlist line up announced

The SAY Award have today announced an outstanding line-up for this year’s Live at the Longlist event as Free Love, Kinnaris Quintet and Sacred Paws all take to the stage ahead of the 2020 reveal.

TeamEilidh takes to the streets in virtual event

Runners and walkers across Scotland will be taking to the streets this weekend (5 & 6 September) in a virtual event in support of the Eilidh MacLeod Memorial Trust.

Win the ultimate staycation for you and five friends!

Tennent's is giving fans the ultimate staycation at a lighthouse to celebrate their latest beer, Tennent's Light, hitting shops and supermarket shelves!

Nursery is on the right track

Bannockburn House Trust has gifted a train planter to local tots to help teach them about growing their own food and plants.

Forth Valley Chamber of Commerce has launched a data collection app for the area’s business community.

A brand renowned for its sweet treats is set to grant a popular wish – by awarding a lifetime supply of its famed ice cream to a lucky fan!

As part of the Scotland Loves Local campaign, Scotland's Towns Partnership is on the search for our High Street Heroes!

1 week left to submit youth made short films to the 2020 FYFF competition!

Only 1 week left to submit youth made short films for inclusion in the 2020 festival programme and competition.

Bloody Scotland International Crime Writing Festival reveals its 2020 programme today - an entirely on-line festival over the same weekend it should have been taking place in Stirling.

A winner and runner-up for Scotland will be chosen from seven Scottish groups shortlisted for this year’s Epic Award and Stirling Photography Festival is on the short list!

Studio Lambert North and Channel 4 are on the hunt for a new wave of brave Scottish singletons willing to bare all for series seven of the hit show Naked Attraction!

Loch Lomond Shores have announced the postponement of the Loch Lomond Food and Drink Festival until 4th and 5th September 2021.

Career Lessons to Draw From

A series of online workshops to support artists and creatives with their careers has been launched by Stirling’s Place Partnership project.

Come along to Duncarron Medieval Village on 19th & 20th September to learn about the Viking Invasions of Scotland and how life would be lived in a typical Vikings Village!

Woodland Experience has launched Santa@Home, a fun-filled experience that will ensure your family can still enjoy Santa’s magic this year from the comfort of your own living room!