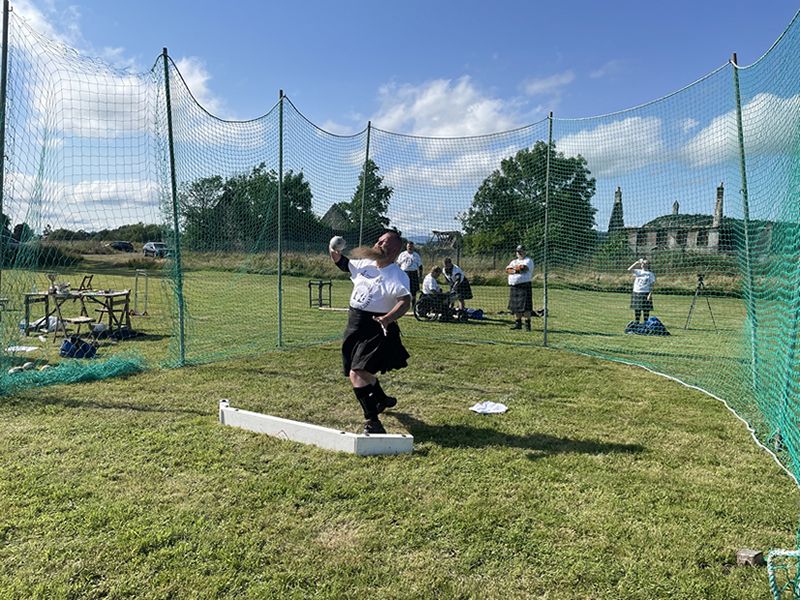 The group of five men and one woman from Wounded Highlanders - the UK’s only adaptive Highland Games team – are busy training for the event on Saturday August 20.

Last August, they competed in the adaptive competition at Stirling’s virtual Highland Games and were filmed throwing the hammer, weight for distance, shot put and caber.

Between them, they beat nine world records that day and are aiming to better that achievement when they compete in front of crowds at Stirling’s first in-person Games since 2019.

Chairman Jim Holborn, who founded the team in 2019, set world records for hammer and shot put in his category last year and is looking to beat those distances and target a new record in weight for distance this year.

He said: “I’m coming to Stirling with the aim of coming back with my two world records and more and we are all hugely looking forward to the event.

“All six of us are training hard to keep the world records we broke last year and
set some new records if we can.

“Stirling Highland Games has a great fan base and I think the crowds will be surprised and excited when they realise adaptive athletes can participate in the same events as the heavyweight athletes.

“The distances we throw may be a little shorter and in certain classes the weights are lighter, but it’s generally the same competition and an opportunity for us to show what we can do.”

Stirling Highland Games President Matt McGrandles was delighted to see the Wounded Highlanders compete at the 2021 virtual event and is looking forward to watching them set more records this year.

He said: “After hearing about the positive experience the Wounded Highlanders had at the Mey Highland Games, I was keen to see how Stirling - as an inclusive Highland Games - could help take their ambitions forward.

“I’m extremely proud the Wounded Highlanders are coming to Stirling – they have a huge amount to offer and we are keen to be at the forefront of being an open, inclusive and fair Highland Games.

“And after breaking an impressive nine world records in 2021, we know the team are eager to challenge themselves further which makes it all the more exciting for Stirling to host such a high level of competition.”

The Wounded Highlanders, who train at The Power Bar gym in Sunderland, have been campaigning for more inclusivity for people with disabilities at Highland Games events.

This year the team – who include Scottish-based athletes Trish Lawson and David Dent MBE who uses a wheelchair – will compete at Mey Highland Games as well as Stirling and hope more event organisers will follow their lead.

Mr Holborn said: “Stirling and Mey are the only two Highland Games with adaptive events this year but there are others who are interested and who we are talking to.

“I can’t thank Matt and the team at Stirling enough for what they have done – last year was brilliant and a real boost for the adaptive community and once again he’s given us the platform to show what people with disabilities can do.

“It’s great for the team and it’s good for the public to see an adaptive games and the more we are seen and spoken about, the more likely we will receive invitations to compete in other Highland Games.”

This year’s adaptive heavyweight contest is sponsored by the Highland Reserve Forces and Cadets Association (HRFCA).

The organisation’s Employer Engagement Director Roy McLellan said: “We are delighted to sponsor the adaptive competition and help give disabled veterans a platform for their sport.

“It’s a great fit for us given our focus is on supporting and promoting the military and its veterans and we’re looking forward to a wonderful day out in Stirling.”

Stirling Highland Games runs from 10.30am until 5pm on Saturday August 20 and tickets can be bought now or on the day.

Other highlights are performances from Stirling Gaelic Choir and local pipeband The Balaklava Pipes and Drums.

The event is sponsored and grant-funded by a variety of organisations including Active Stirling, EventScotland, Forth Valley Chamber of Commerce and Specsavers Stirling.

For more details on the Games and to book tickets, visit www.stirlinghighlandgames.com

For more information on the Wounded Highlanders, visit www.woundedhighlanders.co.uk

More than 70 events will take place across Scotland on 21st June to mark the global annual celebration of music!

Stirling Council and its public safety partners are urging people to stay safe around open water this summer as Drowning Prevention Week (DPW) launches across the UK and Ireland.

Summer 2022 marks the 20th birthday of Loch Lomond Shores and they're celebrating in style with a brand-new FREE festival called Summerfest on the 2nd and 3rd July!

A Ukrainian opera singer is among the performers launching Refugee Festival Scotland – a unique celebration of refugee arts and culture coming to towns and cities across the country.

One of Scotland's most iconic heritage attractions and star of hit TV series Outlander, Doune Castle, has reopened to the public.

Cash Boost for revamp of shopfronts in Stirling

Stirling's shopfronts have been given a major facelift thanks to a £100K cash injection from the city’s Business Improvement District.

New round of grants to boost creativity

Scene Stirling has announced its first round of arts grants for 2022, with local artists and creatives invited to apply by Wednesday 22nd June.

Scotland’s national music prize, the Scottish Album of the Year (SAY) Award, today announces Stirling as the host city for its 2022 ceremony.

Showcasing a captivating mix of acts by fresh and accomplished talent, the Gilded Balloon is returning this August with a big, bold programme of outstanding entertainment!

Tackling Waste one cup at a time

A pilot reusable cup scheme will be launched by Forth Valley Food and Drink network today (Wednesday 1 June) in a bid to tackle single-use cup waste and littering.

Who will be crowned the top cocktail bar in Scotland

As the country heads out to enjoy the Queen's Jubilee long weekend, punters are being asked to nominate and 'crown' Scotland's very best cocktail bars.

Boost for communities as Scottish heritage projects are awarded funding

£142,040 has been awarded to 11 heritage projects as part of the Historic Environment Support Fund, administered by HES.

A free workshop to help arts professionals understand the impact of trauma on people’s lives is being held at the University of Stirling this month.

YMI Programme has delivered a staggering increase in children's engagement with music across Scotland.

An ambitious business plan outlining initiatives to raise Stirling’s profile and create a cleaner, safer and more vibrant environment is being launched by the city’s BID.

Stirling Council is warning people of the dangers of Giant Hogweed as Invasive Species Week gets underway.

Can you help people living with chest, heart & stroke conditions across Scotland

Chest Heart & Stroke Scotland is calling for people in the local community to become Collection Can Volunteers to help raise vital funds.

Visitors to this year’s Stirling Highland Games are being asked to `plant a tree’ and help breathe new life into Scotland’s native woodlands.

Scottish Book Trust, the national charity changing lives through reading and writing, will host Bookbug Week from Monday 16 May – Sunday 22 May.

Stirling will stage a five-day celebration of home-grown stories this month with the return of 'Off the Page', a popular book festival.

Circus Vegas, a new death-defying circus, is touring the UK in 2022 and comes to King's Park, Stirling from 30th June to 3rd July!

Summer Holiday Club at The Peak

Join us this summer at The Peak Holiday Club, it's jam packed with plenty of fun sports and activities to suit all ages!

Join us in the grounds of Stirling Castle as Chapterhouse Theatre Company bring the beautiful story of Pride and Prejudice to life!

Take a History and Horror Tour around historic Bannockburn House, Stirling to hear gory tales and ghastly stories from the past.