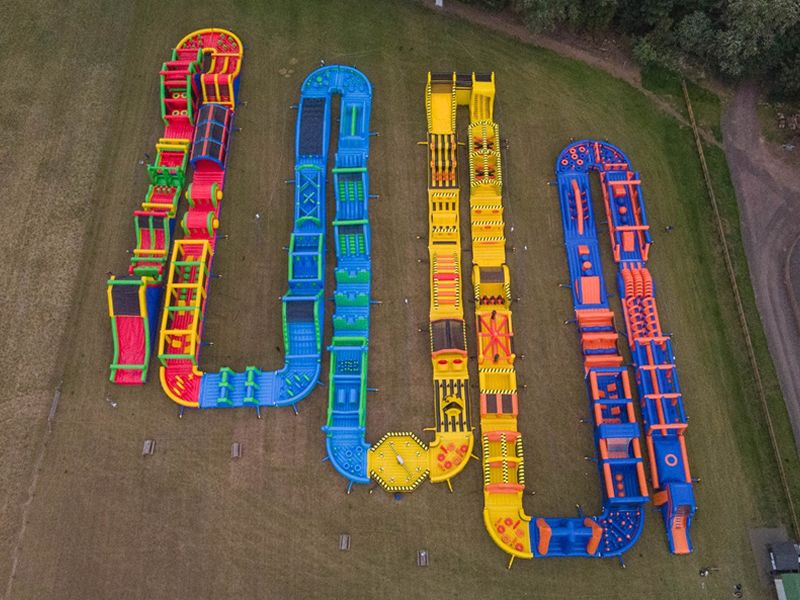 Conifox Adventure Park has today confirmed that they have officially broken a world record for the longest inflatable assault course which sits at a mammoth 568 metres, almost 73m longer than the current world record course, and longer than 5 premiership football pitches.

Alex Cole Hamilton MSP comments, “This is like nothing I’ve never seen before and it’s great to have a world record breaking installation like the Tartan Titan in the heart of Edinburgh. Coming as it does on the eve of the festival, it really puts the heart of the city on the map. I am so proud of James and all of the team here at Conifox who have really done the best they can to bounce back quite literally from the pandemic.”

The Tartan Titan is an immersive interactive adventure that transports participants into their favourite game shows, from Ninja Warrior to Total Wipeout and Gladiators and crammed with challenges for all ages, the attraction is a real crowd pleaser.

Glenn Pollard, Official Adjudicator for Guinness World Records®, “Guinness World Records® titles are not easy to achieve by definition. It gives credibility to Conifox Adventure Park as well as anyone else who wants to come along and try and break it. Given the previous record has stood for 4 ½ years they would have a very tough job ahead of them.”

The unique attraction is only available for limited dates this month (August) with dedicated time slots for adults and younger children, it’s an escapade the whole family can enjoy as they climb, crawl, jump and bounce their way through the course.

Open to everyone taller than 1.2 metres, The Tartan Titan features 50 sections of obstacles including the Corkscrew, Wipe Out, Ninja Run, Ladder Challenge, Tidal Wave and Everest Slide. There are also special Challenge Days when visitors can attempt to set a record time on the course with a prize for the winner of the #TITANCHALLENGE.

The spectacular course is the latest addition to Conifox’s award-winning adventure park, at Kirkliston on the outskirts of Edinburgh, which recently invested £ 2 million in a new Activity Centre.

James Gammell, Managing Director of Conifox Adventure Park, says: “The Tartan Titan has been fantastically well received and we’re absolutely delighted to be able to announce that it has been officially adjudicated as the world’s longest, by the Guinness World Records®.

“Dates to take on the challenge are running out and we’re keen that as many people as possible get the chance to experience this amazing attraction. It is only available from 6th- 16th August, so there is no time to lose.”

Thrill seekers looking for their next big challenge need to sign up soon or miss the chance to tackle Scotland’s Tartan Titan. To make a booking for the Tartan Titan or Conifox Adventure Park visit www.conifox.co.uk

Artists and designers in the Stirling area will have the opportunity to create bespoke trophies for Scotland’s coveted national music prize – the Scottish Album of the Year (SAY) Award.

The UK's biggest National Park was the chosen location for the latest Green Space Dark Skies project, by the outdoor art experts at Walk the Plank.

Children and young adults across the Forth Valley have the chance to be a part of history by designing a logo that will be displayed on STEP’s various platforms throughout 2023.

Over 75 leading finalists have been revealed today for The Scottish Bar & Pub Awards 2022.

International visitors are set to receive a warm welcome from Stirling’s business community as they arrive for the return of the city’s renowned Highland Games.

Ahead of Exam Results Day next Tuesday (9 Aug), Stirling Council has launched a new mental health service for local young people and is highlighting other available supports.

From the Costa Del Leith to the Clyde Riviera, IRN-BRU is set to deliver deckchairs and ice-cold cans to Scottish sun-seekers!

Perthshire Preserves gets on board with Fingal Edinburgh

A Perthshire jam-making company has announced a buoyant new partnership with Scotland’s only luxury floating hotel, Fingal, as part of ‘National Afternoon Tea Week’ from 8th to 15th August.

Encouraging news as Grandstand tickets for the Stirling Highland Games are being snapped up by overseas visitors coming to Scotland.

Following an unannounced visit by inspectors in May, Cambusbarron Nursery was awarded a grading of ‘5’ (Very Good) for both its quality of care and support and quality of staffing.

Fans, artists and music labels have just over 24 hours left to submit their favourite Scottish album from the past year for this year's SAY Award.

Doune the Rabbit Hole celebrated a triumphant return this weekend, as 10,000 ticket holders flooded through the gates at Cardross Estate to enjoy a weekend full of music, dancing and family fun.

Be part of an unmissable moment in Scottish history as one of Scotland’s most ancient clans reunites for the inauguration of the first Buchanan Clan Chief for over 340 years.

Doune the Rabbit Hole kicks off for 2022

Doune the Rabbit Hole, the beloved festival described as “a mini Scottish Glastonbury”, kicked off in style last night at the picturesque Cardross Estate.

Visitors will have the chance to browse high-quality crafts and sample a wide range of delicious food at this year’s Stirling Highland Games.

Stirling’s business owners have given a resounding ‘Yes’ to a second term for the city’s Business Improvement District (BID).

Scene Stirling partners Artlink Central and Macrobert have joined forces with NHS Forth Valley to bring a dementia inclusive theatre show to the region.

UNBOXED: Creativity in the UK is a celebration of creativity taking place across the UK in 2022 featuring free 10 major creative projects.

Today, the Scottish Album of the Year (SAY) Award returns for 2022, calling on artists, labels and music fans to submit eligible albums – for free. 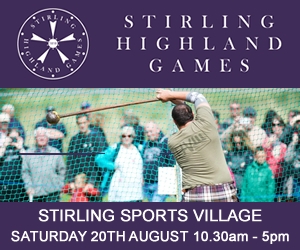 The Stirling Highland Games return in 2022 with an exciting programme of activities to entertain everyone!

After a hugely successfull fair in May, Prize Painted are back for another Antiques, Vintage & Collectors Fair on Saturday August 20th at Bridge of Allan Parish Church!

Insideout Theatre Productions Ltd present A Night at the Musicals with songs from Les Mis, Wicked, Cats and so many more!

Hotel California return to The Albert Halls to perform their spectacular show that promises to be a fantastic night to remember for all Eagles fans, young and old, new or long-standing.