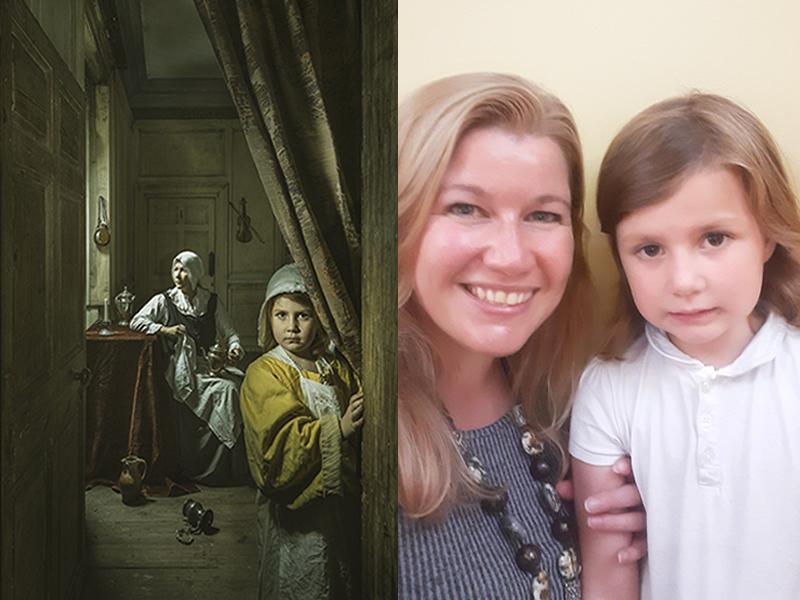 ARMY OF VOLUNTEERS TO HAVE PORTRAITS UNVEILED AT BATTLE HQ

The photography exhibition, which opens at Bannockburn House on 4 September, is the culmination of a two-year project by Airdrie based fine art photographer Mark Leslie, whose work elevates the ordinary to the extraordinary. Capturing the beauty and significance of ‘normal’ people with a photographic style inspired by the Old Masters, from Rembrandt to Ramsay.

During the course of the project Mark took thousands of pictures at Bannockburn House, spending days perfecting each shot as he sought to depict different eras of the 17th century mansion’s rich, colourful history: from the Jacobites to the Second World War.

What’s all the more remarkable is that Mark squeezed the photoshoots in around his full-time job as a support worker for people with disabilities.

Mark said: “I graduated from Glasgow School of Art with a degree in Fine Art in the 1980s, but with starting a family and sustaining a head injury my arts activities were put on hold until about five years ago when I started photographing old, abandoned buildings in my spare time. That’s when I discovered Bannockburn House and completely fell in love with the place. I found the place intoxicating and I still do.”

Through honing his photographic craft, Mark developed a methodology which integrates his fine art training with digital photography.

Mark said: “Sitting for a portrait is something we normally associate with royals or dignitaries, but for me the real VIPs are ordinary, hard-working people. I remember meeting Helen, one of Bannockburn House volunteers for the first time. She was cleaning the windows on the landing. As soon as I saw her, I thought I want to take your photo. I remember telling her and her reaction was, ‘don’t be daft’. Sometimes you see things in people that other people miss. Fast forward three years and she’s saying, ‘I’m ready for my close-up Mr Leslie!’”

For 79-year-old Helen McGregor, it was the first time she had sat for a portrait in over 65 years. She said: “I remember sitting for my art teacher when I was about 14, but that was a very long time ago! Mark and I get on really well, so I found the whole experience really relaxing – I am quite good at sitting, I’ve had lots of practice in lockdown!

“I love all of Mark’s portraits, but my favourite is the one he took of my granddaughter which is reminiscent of ‘The Girl with the Pearl Earring’. Emily is also 14, isn’t it funny how history repeats itself!”

For gardening volunteer Louise Elliott, the experience helped her get over her fear of having her picture taken. Louise said: “Normally I would run a mile when someone asks to take my photo, but I decided to give it a go. I hardly recognise myself in the images, I look so different.”
She added: “I love how Mark has brought the house to life – my favourite ones are the 1940s land girl photos. They really look like something out of a war time magazine.”

Volunteer Kat Nicolson, who can normally be found in her DIY overalls, jumped at the opportunity to dress up. She said: “When I slipped on the Victorian dress, I felt like a completely different person. It really helped me to connect to the House and the people who once lived here.”

Construction volunteer Jim Palmer also praised Mark’s method. He said: “Mark has a clear idea of what he wants to achieve with each portrait and spends hours getting every little detail right.”

The final photographs will go on display in the mansion’s grand Laigh Hall, where they’ll hang alongside a portrait of Bannockburn House’s most famous resident, Bonnie Prince Charlie, highlighting the important role volunteers play in the restoration project.

Penny Ellis, Chair of Bannockburn House Trust said: “Our wonderful volunteers have worked tirelessly to bring this once neglected but beautiful building and its grounds back to life.

“The mansion was built around 1675, but the historical significance of the site goes way back. Bannockburn House sits at the crossroads of Scottish history, the Romans marched through the estate 2000 years ago, it’s part of the Battle of Bannockburn site, Bonnie Prince Charlie used the House as his battle HQ in 1746, and it became the centre of Scotland’s tartan industry in the 19th century when production was banned in the Highlands.

“Volunteers are the lifeblood of our project, and this exhibition recognises their pivotal role in helping us secure a bright future for Bannockburn House as a vibrant community resource and leading tourist attraction.”

Mark Leslie’s exhibition will run from 4th-17th September, Monday-Saturday, 12-4pm. Entry is free, but slots must be pre-booked on Eventbrite. Click HERE to reserve your space.